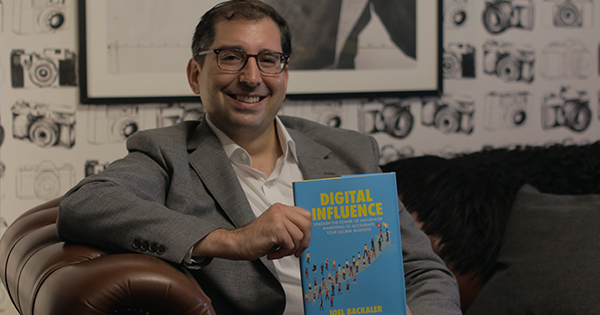 His book, the second he’s written, discusses the rapidly evolving world of influencer marketing and the critical context and practices that will enable marketing professionals to better understand why collaboration with influencers is so necessary in today's global business landscape.

Through his expertise and experience in the US and abroad, Joel’s book provides a pertinent perspective on how influencer marketing is an impactful channel for brands to connect with their audiences, across the entire customer journey.

But enough from us -- let’s hear from Joel!

What made you write this second book?

JB: I think both books that I’ve written have coincided with different moves that I’ve had in my life.

My first book “China Goes West” came about when I moved from China to the US and I started seeing a lot of the Chinese brands come up and start going global in the US and other international markets.

What exactly defines an influencer for you?

JB: Depending on who I spoke to through my research, it really depended a lot on the subject. For example, if I were speaking to a technology company in the B2B space, they cared a lot about industry bloggers or analysts from companies like Forrester Research or Gartner.

If I spoke to fashion executives, it was all about Instagrammers or traditional celebrities. Then there would be obscure cases: I spoke to a lot of different people, for example, those who were in the toy industry, and for them they cared a lot about these YouTube toy unboxers.

I came across a lot of these strange examples and I was trying to figure out what are the common characteristics that all influencers have in common: Number one: they all essentially are known for something among a target community. Number two: they can cause that community to take action based on their expertise.

They can talk about anything but if a beauty influencer for example is known for producing YouTube tutorials on cosmetics, they can obviously promote a cosmetics brand and at least get attention or drive potentially some sales.However, if that same influencer where to go out to the same audience with something very different, like video games for example, it’s very likely that nobody’s going to take action.

Can “influence” travel across borders?

JB: As a global marketing strategist, one of the things that I found very interesting about this phenomenon was could influence travel across borders? Could you take an example, for example of someone that has a strong local presence in a market like the US and have them be successful in a market like China or Latin America? And I found that sometimes it’s possible but oftentimes it isn’t.

If you take the example of Kim Kardashian; I know right now she’s probably more of a celebrity than a traditional influencer, but it’s been interesting to watch what she’s done by taking her brand and bring that into the China market.

She recently joined the Chinese social media app called Xiaohongshu. It goes by the name “Red” in English and it’s currently used by over 100 million beauty fans to identify the latest beauty trends from the West and also purchase overseas products. It seems like Kim’s doing this because she’s trying to connect with Chinese consumers to sell her KKW beauty line.

The problem is, there’s a few problems with this though: First of all, Kardashian is far from a household name in China. People don’t know of her the same way they know in the US. Then, KKW has very little brand recognition. In China there’s a very good way to get a sense of which products are hot and it’s through looking at Alibaba’s Taobao marketplace and very few sellers are selling KKW. And, the ones that are have pretty low sales.

I’d say the biggest mistake she’s making is she’s trying to communicate with the Chinese audience in English. If she wants to reach a mass market the way she’s been able to do in other markets, she needs to somehow either translate her content into Chinese or start studying Mandarin.

Is there an example of a company doing global-local influencer marketing well?

JB: One of the best examples of a company that I found that’s doing global-local influencer marketing well, is a company based in California. They focus on online education and what they did was they worked with local influencers in China on the WeChat social network.

I spoke with their head of social media marketing for China and what she did is she essentially combed through countless profiles on WeChat trying to identify early education influencers that Chinese mothers would go to learn what are the best products from the West that can help teach their children English.

Over time, it was hard to find the right partnerships because a lot of them wanted to be paid exorbitant amounts of money to partner. So eventually she did find a few that would work on an affiliate basis and one of the first ones she found generated about 100,000 dollars in sales in the first 24 hours alone. And this is for a product that retails for about $100 for an annual subscription, so over time they’ve scaled this and this business now has China as their second largest market outside the US and they don’t even have a formal office there.

What have you learned about Influencer Marketing Management through your research?

JB: Influencer Marketing Management was what I found to be one of the more complicated areas of management within a global organization. As I looked at where it sat within large companies, sometimes it will be in the social media department, sometimes in digital, sometimes in PR.

Other times, it’ll be in areas like their corporate affairs office. And what’s challenging here is because of that lack of consistency it would sometimes lead to confusion among the influencers, so you’d have the same influencer being reached out to by multiple departments in the same organization with competing request. So that can be extremely confusing.

Some of the things that companies can do and are doing is, on one hand they are working with agencies which can be helpful if you’re trying to get a better sense of who are the right influencers that maybe have the right characteristics, if your internal team isn’t large enough to be able to be more hands on with your influencer community, they can be a valuable extension, but at the same time the ones that I’ve been seeing it do really well are the ones investing in dedicated influencer relations practices where they have teams that are managing and an always on influencer network to go out and make sure that they are engaging influencers on an ongoing basis and not just through transactional one-off campaigns. This saves them a lot of time and resources because they don’t go through all the effort to identify the right influencer, find out who’s a good match and then just say goodbye after that one campaign. They maintain those relationships and they almost become kind-of indirect brand ambassadors.

What role does influencer marketing have in the B2B space?

JB: One of the things that I found interesting is there’s a lot of talk around B2C influencer marketing. A lot of the examples you see have to deal with these short-term oriented campaigns generally, maybe, in the health and beauty space, but what I find very interesting about B2B is there’s a lot of value especially if you look at the nature of their sale. They generally have much longer sales cycles and they also have to involve many different decision makers in those processes.

If you think about the way a traditional sales process works, there’s only so many times your Sales Rep can go out, call that prospect and say “Hey, are you ready to buy now?” are “Are the budgets ready?”. It just doesn’t make sense in the way that people are used to buying today. By partnering with the right B2B influencer, they’re able to co-create content and essentially get that same message out but in an indirect way that actually adds value to their prospect’s business.

In that way, when their budgets are ready or when their business organization gets to the point where they are ready for your solution, you are the first topic or the first choice or vendor that comes to mind.

What is a good example of global influencer marketing done right?

JB: One of the more interesting case studies I came across is with the company Lenovo. A few years ago, they came out with a global integrated influencer campaign where they worked with influencers across multiple markets. One was based in Russia, one was based in the US and one was based in India. This is all round when they were launching a new product called the Yoga. It was a part tablet part laptop but it didn’t quite fit in either bucket.

Their marketing team went out and they identified a hashtag being used online called #GoodWeird. It was being used to describe things that were cool but in strange and kind of interesting ways.

It became the basis of a global content marketing campaign with a very strong influencer component. They didn’t pay the influencers directly, but they gave them the freedom within a framework, the resources, the tools to create videos that were kind of strange and outrageous, and they led to a tremendous amount of engagement in those key markets where those influencers were based. And then also when I was speaking to the chief marketing officer he said because many of those influencers had audiences outside of those markets there were some unexpected benefits. Especially, in some countries like Pakistan, where they weren’t initially targeting. It was a way where they took a global approach but localized it for the different markets where they really wanted to focus on.

Read Next: “From Transactional to Relational: Expectations for Influencer Marketing in 2019” on why leading with relationships is good for your strategy and ROI.